Inspired by Dan Golding’s John Williams presentation on ABC Classic I’ve put together a selection of ten tracks to take you on a musical journey through the world of John Williams.

These aren’t necessarily his greatest his greatest hits or his most familiar themes. Instead I’ve pulled together ten of his lesser known pieces to illustrate the diversity and emotional power of Williams’ music. 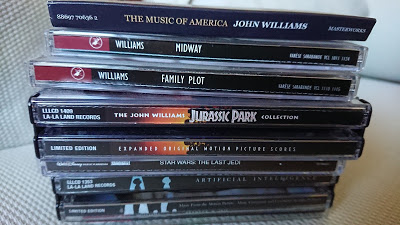 1. Journey to the Island (Jurassic Park)

We begin our journey in prehistoric times, or at least a recreation of them, as we fly to Isla Nublar and Jurassic Park. That first sight of the dinosaurs on the island has to rank as one of the greatest moments in cinema and John Williams’ noble theme never fails to bring a tear to the eye.

A long journey requires endurance and spirit. Williams has composed music for four Olympic games, but this is my favourite. I remember camping in outback Central Queensland with only a radio to keep abreast of the Seoul Olympics and each broadcast would be introduced with The Olympic Spirit. I didn’t know that John Williams composed it at the time, but it’s little wonder I fell in love with its rousing theme.

3. A Window to the Past (Harry Potter and the Prisoner of Azkaban)

Our journey now takes us to a magical place, but one with a dark history. Harry Potter and the Prisoner of Azkaban was my favourite movie of the series, no doubt in part due to John Williams’ wondrous score. This haunting theme is one of many in this episode, as Harry and his teachers recall Harry’s murdered parents. The Prisoner of Azkaban was the only movie shown on our first flight to Europe and the soundtrack represented the magic as we travelled through countries with their own dark pasts.

Staying in Europe’s past here, The Book Thief conveys both the horror and the humanity and hope of a young adoptee in Germany during the Second World War. Though famous for his big scores and grand marches, John Williams has composed many delicate scores for much smaller movies, and The Book Thief is a fine example of this. I first watched the movie on another flight, this time to Japan, with the score now reminding me of flying 40,000 feet above the ocean on a sunny day, so far away from the cold grey Germany portrayed in the movie.

5. Becoming a Geisha (Memories of a Geisha)

We’ve now landed in Japan, my favourite country other than my own! I believe that Memories of a Geisha was one of John Williams’ finest scores in recent memory, combining Western melodic sensibilities with a genuine Japanese sound. Becoming a Geisha propels me along the incredibly scenic railway line through the mountains to historic Takayama, the whole soundtrack capturing the beauty of the country in spring.

John Williams is the master of the march. This is one of his lesser known ones, but one I have a lot of fondness for as the US Navy goes into battle with the Japanese aircraft carriers in a pivotal battle of World War Two.

7. Toy Planes, Home and Hearth (Empire of the Sun)

Staying in the Pacific Conflict of World War Two, this time we follow the story of a young English lad growing up as a prisoner of war when the Japanese invade China. This particular piece interpolates Chopin’s Mazurka Opus 17 No 4, but is beautiful on its own if you can get your hands on the special edition release of the soundtrack.
I first heard this music as a new release on ABC Classic FM and it immediately evoked strong imagery. I then borrowed J.G. Ballard’s book from the library and it too was powerfully visual. It was with great surprise that I saw those same pictures in Steven Spielberg’s screen adaptation

8. Parade of the Slave Children (Indiana Jones and the Temple of Doom)

The journey moves to India with the rousing struggle of child slaves freeing themselves from an evil cult. Musically I always thought that the first three Indiana Jones movies followed those of the Star Wars movies, with the second introducing a number of memorably great themes.

9. ET and Me (E.T. The Extraterrestrial)

After a long journey one can get rather homesick. This time we are not the travellers, but the ones meeting a traveller from very, very far away. This particular piece captures the wistful sadness I felt at living so far away from my previous home in Melbourne. Everyone knows the Flying Theme from ET, but the movie has so much great music, this being a concert arrangement of the relationship between ET and Elliot. Just to listen to this soundtrack is an amazing emotional journey in itself.

Finally our journey comes to a close in the most triumphant way possible. No John Williams journey would be complete without Star Wars, the movie that introduced me to film music a long time ago, in a city far, far away.
I could easily have chosen a hundred more songs to include in my list, but each of these pieces is a soundtrack to my own emotional and musical journey through life. I hope that you have enjoyed the list and find your own joy in the music of John Williams.