It’s 2019 and time for another concert. Actually, I wasn’t planning to attend any this month but the Sydney Symphony Orchestra offered a couple of free tickets to some 20th and 21st Century music so who was I to refuse, especially when David Robertson is conducting?

Richard Strauss’s Thus Spake Zarathustra isn’t quite 20th Century, but it was made famous by a rather famous movie called 2001: A Space Odyssey, so that counts. The only bit I’m familiar with is the Introduction: Sunrise.

For the rest of the piece it sort of felt like Zarathustra spake too much, but I’m not a huge classical music fan. Too much exposure as a child I should think. But it was certainly interesting from a tonal sense, watching the different elements of the orchestra, including the massive pipe organ looming high above the stage.

A large portion of the orchestra disappeared for Nigel Westlake’s Oboe Concerto Spirit of the Wild, written for the SSO’s Diane Doherty.

Doherty’s virtuoso oboe performance was amazing, but I really enjoyed the accompanying orchestral melodies. Westlake has composed for a number of films and I could quite imagine some cinematic scenes for his music. What I couldn’t really see was the Tasmanian wilderness that inspired the score – My own experiences would have lead to very different music. Still, this was the highlight of the night in my opinion.

The orchestra returned for the final piece of the night, Percy Grainger’s The Warriors. In fact, it expanded with three pianos on stage, a celesta, two harps and a number of other instruments including a heckelphone, which sounds like an audience rather than an instrument.

The conductor had to enter from the right as there wasn’t any room through the normal entrance.

I thought all that sound made the piece rather muddy. It lacked a strong melody and again, it wasn’t really my thing. But it was visually spectacular and picking out individual sections made the experience quite interesting. Some of the brass also decamped during the piece and you could hear them play outside the concert hall, which was a curious development.

David Robertson, the Chief Conductor and Artistic Director of the SSO, was mesmerising to watch, his conducting a performance in itself. If that baton was a wand the spells he would create would definitely be those of a grand musical wizard.

I’m glad I had the opportunity to attend the opening Gala and am looking forward to a year full of music. 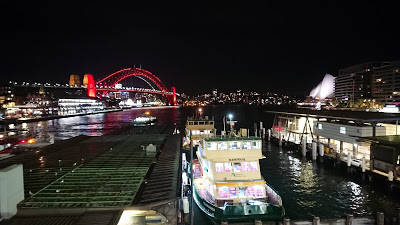