Skip to content
The latest in the film with live orchestra concerts series was Star Wars: The Empire Strikes Back. I have a story to tell about The Empire Strikes Back, but I think I shall keep it for next time. I have tickets for Melbourne, where the story resides. For now let me tell you about the Sydney concert.
Like Star Wars: A New Hope, tonight’s concert was held at new Sydney’s International  Conference and Convention Centre in Darling Harbour. The theatre is huge and I was seated quite far from the orchestra, though in the middle. The distance detracted from the excitement of watching the orchestra up close, their movement adding to experience. At least I could see the entire orchestra.
Nicholas Buc, who seems to be in Japan, was replaced in conducting duties by Hamish McKeich from New Zealand. Unlike Buc and some of the other previous conductors, McKeich gave no introduction to the audience, no encouragement to cheer at opportune moment. Indeed the audience was rather passive tonight, applause fairly scattered until the end.
I wasn’t fussed by this as I was there for the music and indeed it was good to clearly hear the orchestra over the movie. I did wonder if the sound was rather enhanced by the speakers, at that distance it was a little difficult to tell.
The Empire Strikes Back is one of those soundtracks and movies I know back to front. Before the full score was available I used to listen to an audio recording of the movie, mentally filtering out the dialogue and effects. The Sydney Symphony Orchestra performed to my satisfaction, the live experience allowing me to pick out sounds somewhat lost in the recordings. A few little niggles with the pacing of the opening and closing bars, but that was it for any criticism of the performance.
The movie was naturally the post-prequels special edition which meant that some parts of the score sat uncomfortably with the spliced in scenes. The addition of sequences of Darth Vader returning to his Star Destroyer from Cloud City were particularly unnecessary and only served to disrupt the thrilling score for Luke’s rescue. But there is no point screaming “Nooooooo!” anymore.
I’m looking forward to seeing the concert again with the superb Melbourne Symphony Orchestra at the end of the year. In great news you can also include these film music concerts as a package in the Sydney Symphony Orchestra’s 2019 season. I was apparently their very first online subscriber for 2019 so I have Return of the Jedi and The Force Awakens to look forward to next year as well!
May the Force be with you. 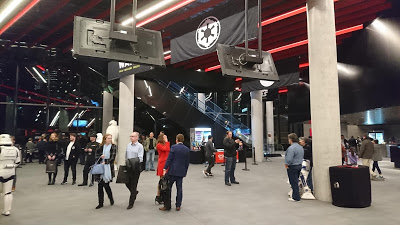