Every two years the ELS21 English language school in Sakai, Japan, bring some of their students across to Sydney for a two week stay with families from Alex’s primary school.

Our previous student, Miyu, had left the school to focus on her high school studies so this time we hosted 13 (almost 14!) year old Momoka. Only for one week as they wanted to house the students in pairs and Momoka’s friend was allergic to dogs. By the second week they were confident enough to stay alone with the host families.

We had also hosted teacher Machiko for the second week last time, but principal Mayumi wanted teachers to stay together this time. Poor Machiko had to leave early anyway due to her father having an accident.

Momoka arrived at our house feeling a bit under the weather with a cold so we decided to tone down the activities from last time and let her recover. I don’t think she minded too much. Obsessed with Harry Potter, she asked to watch all of the first three movies of the series and tried to read her brand new English copy of Harry Potter and the Cursed Child that the previous host had given her.

She also thrashed Alex at Sonic All Stars Racing on the PS3 and matched him on Just Dance. Don’t mess with the Japanese youth when it comes to computer games!

Outings were a bit restricted by regular activities and other duties, plus Momoka’s need to take it easy. We dragged her off to the America Travel Expo at Sydney Showgrounds at Olympic Park, feeling somewhat guilty for doing so, though needing to see if we could find any deals to salvage the points bookings we hold to the US. 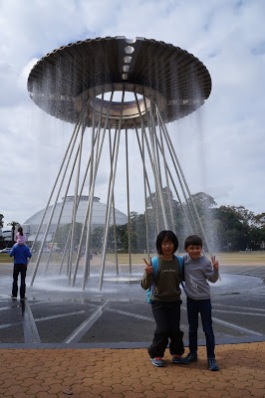 We failed to find anything much useful at the Expo, but the trip turned out not to be such a waste. With the 2016 Olympics currently on in Rio De Janeiro in Brazil and the next Olympics to be held in Japan a visit to the old Sydney 2000 Olympic site was rather appropriate. Plus Momoka and Alex enjoyed the free climbing wall at the Expo and the playground outside. She certainly showed him how it’s done.

We had a few food issues. I don’t think our cooking was always popular and the Chinese restaurant visit saw her eat mainly rice. With more time I’m sure we would have found some better dishes for her. Momoka seemed to subsist mainly on strawberry jam with the odd sushi roll. She didn’t like Vegemite (me neither!) but did like Jaffas. Plus, like me, she doesn’t like mushrooms or octopus, which is difficult for someone coming from the Kansai area where takoyaki is king. Momoka tells me that the alternative is cheese filling. Must try!

Farewells were very sad. Momoka was a delight to have around the house, a very nice big sister to Alex and a very clean and polite guest.

Hopefully we can catch up with the folk of ELS21 again next time we visit Japan. And there’s always two years from now…