I had quite a surprise when I opened an email from the Sydney Symphony Orchestra a few days ago. They warned me that the area around the Sydney Opera House would be crowded for the last night of Vivid and I should leave early for my concert.

Was it Raiders of the Lost Ark or Back to the Future?

I quickly checked my calendar.

Phew, no, it was Hollywood Rhapsody, the bonus concert in the Orchestra Package that I had exchanged for the Raiders concert I already had tickets for. I had prevaricated whether to see this one or a classical concert.

I’m not a huge fan of “The Golden Age of Hollywood.”

It was rather a bit before my time.

There was no way that B or Alex would want to join me for this one. So I headed off alone into the city, rather exhausted after a tough week, a morning of karate and a stint running the library at Alex’s Chinese school.

Another thing I hadn’t planned on doing was seeing Vivid, Sydney’s festival of light and other stuff this year. We were told that Circular Quay station was closed, so after jumping off at Town Hall to buy B a bottle of Japanese tonkatsu sauce, I alighted at Wynyard and walked the closed off streets to Circular Quay along with the rest of the crowd.

The crowding itself wasn’t too bad and the lights were fantastic. The sides of buildings and the Harbour Bridge were colourfully lit, coloured searchlights illuminated the clouds and there were stunning projections against Customs House, the MCA and the Opera House. 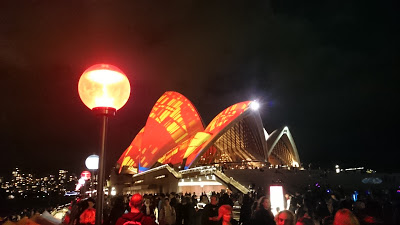 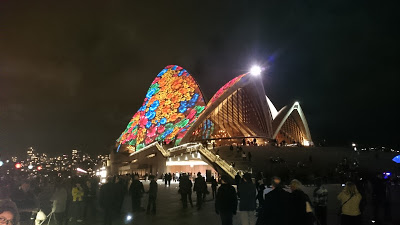 At the Opera House box office they suggested that I might like to sell my two unused tickets to the young tourist attempting to get cheap seats to a performance. I gave them away to him. Hopefully he’ll be nice to someone else one day.

Then I squeezed into my seat. A few rows closer than the nosebleed section of the last concert and quite a good view of the orchestra. 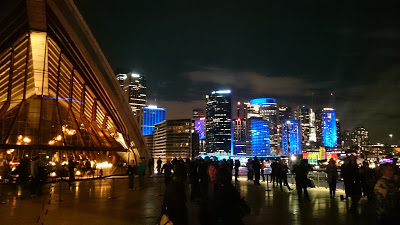 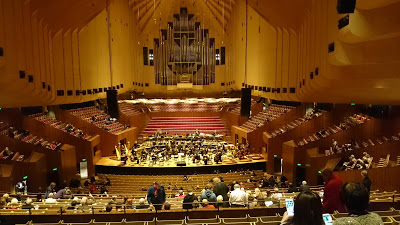 Having checked the program I knew the night wouldn’t be a complete disaster as John Williams’ Star Wars Main Title was the first piece after the 20th Century Fox Fanfare.

The pace was a bit fast and the brass began a little ragged, but it was a decent performance of the piece that I’ve heard live more than any other.

The rest of the music I was largely unfamiliar with except in passing. David Raksin’s theme from Laura was quite pleasant, the string section was faultless tonight. They had a real workout with a suite from Bernard Herrmann’s Psycho score, the famous shower sequence eliciting a few laughs from the audience.

Herrmann’s music continued with Salammbo’s Aria from Citizen Kane, performed by the soprano Lorina Gore. Having developed an ability to ignore the sound of opera thanks to my parents’ musical tastes the best that I can say is that she could certainly hit all the notes.

I recall hearing some of Erich Korngold’s The Adventures of Robin Hood played my the Melbourne Symphony and enjoying it. But not so much this time. As conductor John Wilson said, Korngold became the sound of Hollywood and in my opinion the music sounded cheesy. Except for the first part of the final fight, which could have come from a contemporary battle sequence.

After the interval we heard the Americana of Jerome Moss’ score to The Big Country, which enjoyed, though the style has been reused many times.

Fifteen minutes of Max Steiner’s 3 hour 10 minute score to Gone With The Wind was as much as I could stand. It had some familiar highlights before sinking into bland romantacism.

In contrast, Franz Waxman’s suite from A Place in the Sun contained a number of interesting themes, including some passionately played saxophone solos, enough to keep me listening.

The most fun of the night was John Wilson’s arrangement of Scott Bradley’s music from the Tom & Jerry cartoons. Unlike most film scores, this kind of cartoon music is not the kind of thing you’d listen to in isolation from the screen. Except in this case, it was almost a live action cartoon performed by the percussionists as they used slide whistles, bowls of water and even smashing plates to achieve the zany musical effects.

The final piece in the program was the Parade of the Charioteers from Miklos Rozsa’s score to Ben Hur. Loud, brassy, but I didn’t really like it.

It would have been a pity to end on that note, but of course there was an encore. And what an encore it was! Franz Waxman again, this time the Ride of the Cossacks from Taras Bulba.  A frenetic piece that gave the orchestra a true workout.

The concert didn’t convince to start listening to film music from the fifties and before, but I could sense some of the musical heritage that has contributed to more modern scores. I actually feel that John Williams’ latest Star Wars outing has an even greater nod to the older romantic scores than his original work.

But you shouldn’t need to know all the antecedents of a piece of music to enjoy it. Once again the program, and what I caught of the pre-concert talk, portrayed each composer as being genuine only because they had a classical background or composed concert pieces in addition to films. The elitist snobbery of the SSO grates. At least the conductor didn’t let them get away with lazy performances this time.

After the concert I ran into an ex-work colleague and joined the crowds walking back past the ranbow lights. Fortunately, Circular Quay station was open again. It felt a bit strange to see a number of people clutching concert programs like me get off at Padstow. I didn’t get home until almost midnight, but in the end I’m glad I decided to go.