A week of beauty and boredom, of portents and pretence. A week worth remarking on for its many facets.

It started on Sunday with a trip out to Bondi Beach to view the Sculpture by the Sea exhibition. After catching the train to Bondi Junction and seeing the queues for the buses we decided to walk down to the beach. But first a stop at the Authentic Chip Shop for lunch.

We only chose it because it was open and on our (slightly mistaken) path. It served fried food from the United Kingdom. Fish, chips, burgers, haggis, black pudding. We were not adventurous enough for the last two.

The coastal path between Bondi and Tamarama was crowded and it was difficult just to stop and admire the varied beauty and meaning behind the sculptures. I found myself particularly liking the numerous Japanese contributions, amused by that. Alex was too tired to enjoy much, until he came to the counting gate on the sands at Tamarama. 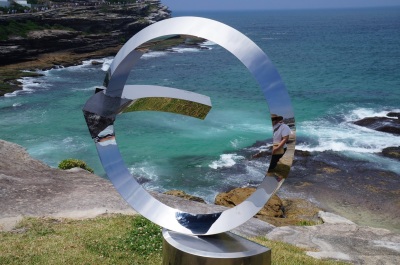 On Tuesday and Wednesday I returned to the coast, though sadly I could not make it further up to the exhibition. I was attending a two day workshop at Coogee Bay, staying at the Crowne Plaza, about working together in the new organisational structure. If I actually had time to do some work together with the other members of my immediate team, normally based in Canberra, it would have been useful. Sadly, much of it was wasted in team building exercises that only management seems to love.

Coogee Beach itself was very beautiful and the weather perfect. After dinner I joined a couple of other members of the team and we walked northward in the night along the promenade. At the bluff we looked back down along the beach and wished that we had brought our good cameras, for the view of the lights shimmering off the gently rolling waves was magical.

Despite the late hour, about 10 pm, the park and beach were still busy with people of all ages taking in the warm night air. There was no drunken belligerence, just happy sounding barbecues, joggers and strollers, beach fishermen, even children giggling.

I returned to my room and discovered free on demand movies were available, selected Pacific Rim and quite enjoyed it.

Naturally I was very tired the next day, but in the gap between breakfast and session opening I took a stroll southward and discovered yet more stunning views as the Sun shimmered off the water. I should like to do the entire coastal walk one day.

Upon my return to my normal office I had to pack up and move to a new building. I am sad to go from a very quiet, very modern, location embedded with mathematicians and statisticians, where I had great views of the south and west, of aircraft flying over, as I stood upon the balcony, to a dingy shared workspace with fellow communicators, people always on the phone or chattering away. I was happy alone. Real communicators tend not to be, but I am a developer. 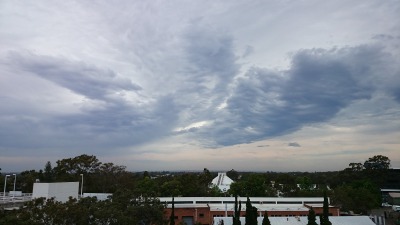 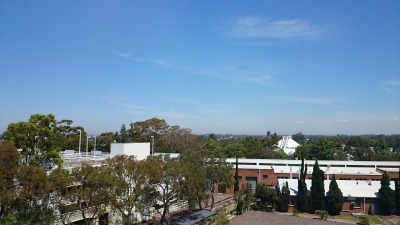 It is storm season and already hot. A couple of weeks ago I had arrived at Padstow station late in the day to see a great rolling storm front to the west, lightning flickering jaggedly down. I thought I still had enough time to reach home before it possibly struck, but no, maybe ten minutes later the bus shook in the ferocious gusts, lightning flashed and heavy rain pelted down. 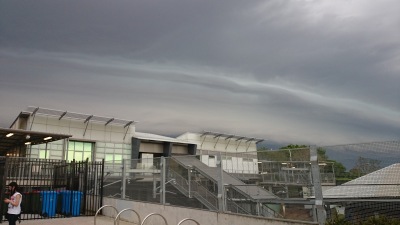 Fortunately I was able to cross to the shelter of our local shopping centre and wait the short time until it passed before walking home.

Then today we ended the week with another storm. Again sheltered in a shopping centre, this time Miranda, we noticed little of it, except that half the lights switched off as nearby suburbs lost power. 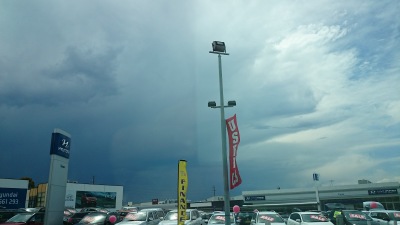 But the wind today was strong until the passing of the storm. A hot wind in the morning, making me think of the Terry Dowling books I am reading right now, where he names the desert winds of a future Australia. 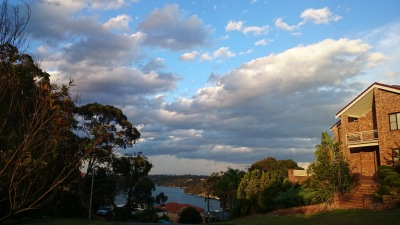 And so the week comes to a close, heat and storm, turmoil and memories blown away to be replaced by a plain and uninteresting normality returned.