My love of Japan is a well known fact so I leapt at the opportunity when Alex’s primary school sent out a call for local families to act as hosts to a group of visiting Japanese students.

Strictly speaking, this wasn’t the first time for me. Twice when I was in my Central Queensland high school studying Japanese my family hosted Japanese exchange students. Neither worked out particularly well, but older, hopefully wiser, more familiar with Japanese culture and being a parent, I hoped that this time would be different.

Considering that Alex is in kindy (his first year of primary school) we were somewhat shocked to be told that our assigned students was female and fourteen years old. However upon meeting Miyu any fears were quickly dispelled.

She came across as shy and quiet. Questions were returned as single word responses. But through games with Alex like Uno and Twister her cheeky side, a quick smile and a little laugh, emerged.

We quickly discovered that she loved chocolate and she hungrily gobbled up snacks like lamingtons, Tim Tams and chocolate ice cream. She took quickly to Alex and B’s new fad of loom bands, even though the instructional YouTube videos were in English.

On the first weekend we took her by ferry to Watson’s Bay for a disappointing meal of Doyle’s fish and chips. Miyu surprised us during that first week by sleeping for about twelve hours a night. She was kept up late one night by the need to meet a cousin from Singapore in the city for dinner. 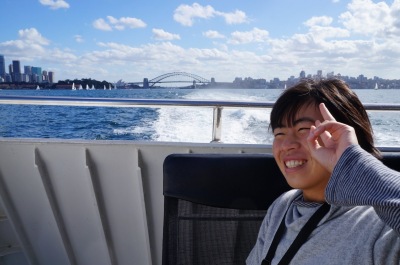 Friday saw us meeting up with other host families to go bowling. It was fun to watch the normally placid Miyu chatting away with her friends and in high spirits with them at the McDonalds dinner afterwards. 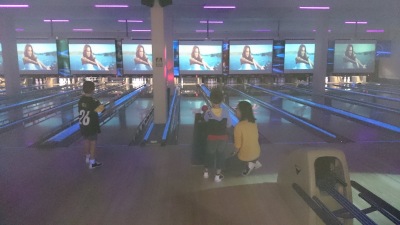 For the second week we were joined by one of the teachers, the effervescent Machiko. We met up with other families at Stanwell Tops, then drove down to Kiama, stopping to watch the tide flow over the rocks at Austinmere and to get lost in Wollongong. That evening we too Miyu and Machiko to eat Malaysian food at Albee’s Kitchen in Kingsford. We’ve seen very few Malaysian restaurants during our travels in Japan. In fact, I can only think of the place in Kanazawa where they serve “raksa”. 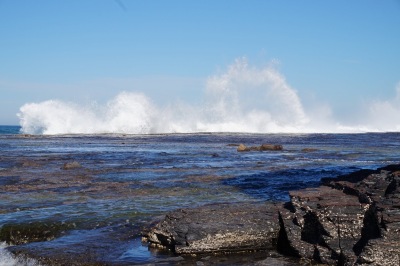 We were too exhausted to go to Featherdale Wildlife Park with the others on Sunday, so instead we visited the closer Symbio Wildlife Park, where there were the ever popular koalas, kangaroos you could hand feed and a wombat that Miyu stroked to sleep. Interestingly a separate Japanese school group were also visiting. Machiko got her taste of meat pie at nearby Helensburgh, where we mucked around at the park, playing Miyu’s sport obsession of volleyball. 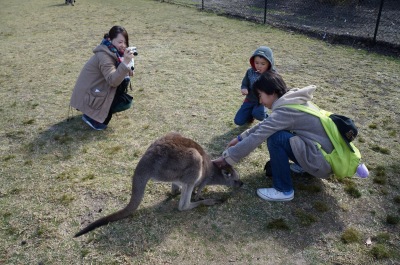 The only time I’ve seen volleyball on television in Australia was during the Olympics, but we once spotted an Australia- Japan match in the latter country.

Miyu prepared us a very tasty beef stew for dinner, while the following night she and Machiko made us nabe, a Japanese hot pot dish. Both were perfect for the cold weather.

As the week wound down Miyu spent more time with us in the evenings. She showed me her house and school on Google Maps, so different to here.

We discussed a child’s life in Japan, contrasted it with their experiences here. No outdoor lunches at recess, no canteens. Japanese students clean their classrooms twice a day, wiping the floors with towels. It’s difficult to imagine something similar here. And they study so late, attending cram schools until 10 pm, barely interacting with their families.

No wonder they didn’t want to go back to Japan!

Whilst we have spent at least a week or two in Japan each year and another few elsewhere for the last decade, in working Japan they get very little opportunity to take vacations. Apart from public holidays time off work is difficult to obtain. Rather than using the Japanese to decry the lack of Australian productivity in comparison, I prefer to highlight the contribution that leave makes to our travel and tourism sector, not to mention the psychological benefits.

Normally I find house gets very stressful, but Miyu and Machiko were an absolute delight to have around. Very helpful, courteous, neat and tidy and independent. I felt quite sad when the last night of their stay arrived.

At the school farewell assembly on the Thursday before departure I was so proud to see Miyu amongst the three selected to speak in front of everyone. She did a wonderful job and probably spoke more English words than during her stay with us!

Then a final morning tea and sad goodbyes on the Friday as a coach drove to the city for a couple of nights.

I hope that we are in a position to take on a student again when they return in 2016. And of course we want to see them during our annual (or more frequent) visit to Japan next year. I can’t wait!