When B organised a trip to Featherdale Wildlife Park with her friends I was less than enthused. After all, I’ve been to many Australian native wildlife parks over the years. Australian wildlife tends to lack the grandeur of megafauna or the antics of primates. I was concerned that Alex would be somewhat disinterested as well, as he shows more fascination with the mechanical over the biological.

The drive out to Featherdale along the M5 and M7 was surprisingly pleasant. It was nice to get out of the urban environment for a while and let the car have a good run.

Fortunately, my fears were unfounded. Almost as soon as you enter the park you are greeted by tame wallabies hopping around your legs. Alex loved feeding them grass filled ice cream cones. Wombats made an appearance and even some of the koalas were awake. One was available for touching. We were in time to feed the pelicans, tossing the raw fish away from the annoying ibis. 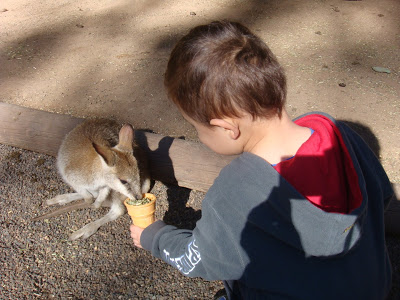 Tawny frogmouths (one strokable) and kookaburras sat around near the koala enclosures. There were young farm animals, dingoes, emus, reptiles and a wide variety of native birds. What Alex liked best was the bat enclosure, but mainly because it was a dark tunnel and he could chase other kids around in it. 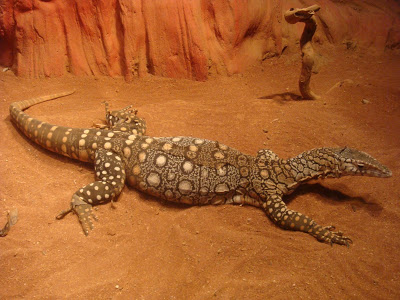 There was enough to see that we ran out of time, as Alex got tired and needed his afternoon sleep. Quite a nice  way to spend Sunday and he won’t lack for things to talk about at preschool this week.