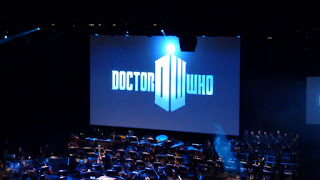 Doctor Who is the world’s longest running science fiction television show. It began over a decade before I was born and I grew up with it on our television, through the ABC endless repeats and new screenings (interestingly my Mum shared a married name with one of the Doctor’s first companions). Now, thanks to the latest incarnation of the series my wife and three year old son have also been converted to Doctor Who fans. Alex has been known to run around his childcare shouting “Exterminate! Exterminate!”

Throughout the Doctor’s many incarnations two things have remained the same: his blue police box TARDIS space/time ship and Ron Grainer (an Australian!) and Delia Derbyshire’s theme music. Since Doctor Who returned to our screens in 2005 this music has been joined by Murray Gold’s spectacular incidental music. His highly complex and thematic compositions are one of the great highlights of the modern series, with nine compact disc worth’s of music released so far by Silva Screen records.

When a colleague mentioned that the Melbourne Symphony Orchestra was performing a concert of Gold’s music to Doctor Who I knew immediately that I had to go. When you are a fan of orchestral screen music in Australia you have to make the most of your limited opportunities and I’ve flown down to Melbourne a couple of times before for MSO concerts of John Williams music.

This time the whole family was going, so we made a short holiday of it, booking seats at the matinee session. When we arrived about 45 minutes prior to the performance the atrium of the Melbourne Convention Centre was already packed with people in fezzes, Tom Baker scarves and other Doctor Who related costumes. There were huge queues for merchandise and programs. Alex and I abandoned the queue for our seats in the hall once the entry chimes sounded, but B steadfastly refused to move, making it in just in time for the start of the performance, along with a t-shirt, program and the CD of the latest Doctor Who soundtrack, only just released in Australia. 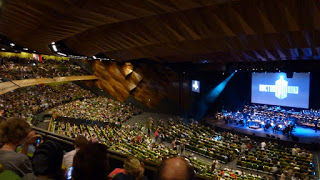 According to the posters outside the symphony’s box office at the Melbourne Town Hall both performances were sold out and I couldn’t see a spare seat in the house. We were seated up in the balcony, with good views, but too far away from the orchestra for my liking. It also meant we were away from the various Doctor Who creatures that made appearances throughout the performance.

Having seen the 2010 Doctor Who at the Proms special on ABC we had a fair idea of what to expect, and indeed there were many similarities in the performances. Instead of regular companions Karen Gillan (Amy Pond) and Arthur Darvill (Rory Williams), we had to make do with Mark Sheppard (Canton Everett Delaware III) as compare, though he did a fine job. Matt Smith’s (The Doctor) appearance was limited to a prerecorded video segment, but honestly, I was just there for the music and wasn’t expecting him. The biggest difference was the appearance of more music from Series 6.

I was a little disappointed by this, as I had not yet had the opportunity to listen to much from Series 6 prior to the performance and Murray Gold’s music does reveal its full impact after a few listens. Furthermore, his music hasn’t, to my knowledge, been played before in Australia and many of his earlier themes from the preceding five seasons are possibly a bit more exciting or emotional than some of the Series 6 selections. Time will tell, now that I’ve got the soundtrack to listen to!

It’s really only a minor quibble though, as there was plenty of great music to be heard and the performance by the MSO was flawless. You’d hope that it was, with the original conductor and orchestrator Ben Foster waving the baton and Murray Gold himself in the audience and later on stage playing the keyboard. In the three times that I’ve heard the MSO I could not fault their performances. In contrast, I have often been disappointed with the Sydney Symphony Orchestra, even when conducted by the composer himself. I sometimes wonder if our local orchestra has the elitist attitude that if it ain’t classical it ain’t worth putting the effort in.

Also to be applauded were the Concordis choir, the soprano Antoinette Halloran and Tobias Cole, the countertenor. All were pitch perfect with no compromises on the performance of the music. There were times I had a tear in my eye the music was so beautiful.

I was a little surprised that proceedings started off with the relatively gentle The Mad Man With A Box, though the next piece An Untimely Arrival was much more dramatic as The Doctor crash lands in Amy Pond’s garden. What got everyone going was one of Gold’s most exciting themes: I Am The Doctor, concatenated with the rousing variation in Words Win Wars, including dialogue. It’s certainly one of Alex’s favourites. 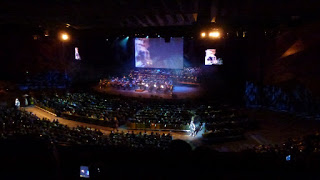 The quiet theme for Amy followed. A Stitch In Time and The Almost People Suite featured music from Series 6, including music for pirates (Alex likes pirates), the embodiment of the Tardis and The Flesh. Abigail’s Song was from the Series 5 Christmas edition, which I have only just discovered is available. The as yet unreleased The Doctor, The Widow & The Wardrobe completed the session. Alex was getting a little agitated and welcomed the opportunity to get out during the 20 minute interval. The crowds at the merchandise stalls were still going strong.

On our return to our seats we were told that we were all Dalek slaves as a group of colourful Daleks patrolled the aisles to the music of Battle In The Skies. Alex loved it, but he was getting sleepy and nodded off during The Majestic Tale Of A Madman In A Box, despite its reuse of I Am The Doctor. Silurians and Saturnyne vampires appeared for Liz, Lizards, Vampires & Vincent, a suite of music from Series 5. I especially enjoyed the performance and it was difficult not to respond emotionally to the clips of Vincent Van Gogh on the screen that concluded the sequence. 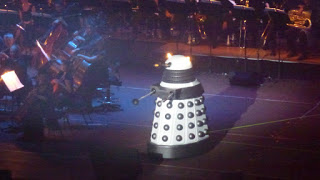 Some more Series 6 music was performed with Closing The Suite and The Wedding Of River Song, then we were treated to Murray Gold arriving on stage before joining the orchestra on the piano. Alex awoke around then. As with the 2010 Proms the audience cheered with each regeneration of the Doctor, saving the loudest for David Tennant, as they were displayed above the orchestra playing This Is Gallifrey followed by Vale Decem. The former is one of my favourite themes and I would have appreciated actually being able to listen to it, but it’s hard to deny the enthusiasm of the audience. I don’t think this arrangement of This Is Gallifrey is as good as the album version anyway. 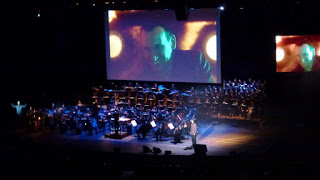 The Pandorica Suite saw a parade of monsters around the hall, including some scary looking Cybermen. Unfortunately, none made it near to us. That marked the official end of the program, but of course there were encores. The beautiful Song Of Freedom was complete with swaying tentacled Ood. The concert finally closed with Ron Grainer famous theme music to Doctor Who. 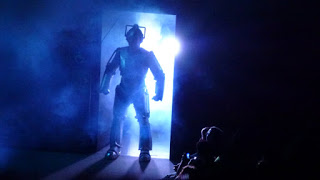 The Doctor Who Symphonic Spectacular has to be one of the best concerts that I have attended. A perfect performance by the orchestra, choir and soloists as well as a wonderful atmosphere generated both by the production and the audience that attended it. The whole family loved it.

The Madman With A Box
An Untimely Arrival
I Am The Doctor
Amy
A Stitch In Time
Almost People Suite
Abigail’s Song
The Doctor, The Widow & The Wardrobe Suite
INTERVAL
Battle In The Skies
The Majestic Tale Of A Madman In A Box
Liz, Lizards, Vampires & Vincent
Closing The Suite
The Wedding Of River Song
This Is Gallifrey/Vale Decem
Pandorica Suite
Song Of Freedom
Doctor Who Theme