One of my dreams has been to take Alex, who is now 2 years and 9 months, to see and hear a symphony orchestra play live and preferably be playing John Williams. Today my dream came true.

I’ve been training him from the beginning. Even when he was but a month or two old I would snuggle him in my arms until he fell asleep listening to film music on my stereo. For a long time he wouldn’t fall asleep unless there was music. I love nothing more than to lie down for an afternoon nap with him as we listen to random music from my collection over the PC.

In March I flew down to Melbourne for the day to listen to the Melbourne Symphony Orchestra play the music of John Williams in the Star Wars and Beyond concert at the Town Hall. Unfortunately, the cost would have been too expensive to justify flying Alex and B down as well and risk Alex not lasting for the whole concert. Then last month I noticed an advertisement in the Daily Telegraph at McDonalds of all places for a John Williams concert at the Sydney Opera House. Perfect! I booked us tickets as soon as I could.

Would Alex last the concert? Would he enjoy himself at all? I didn’t know, but he’s been pretty good on trains and planes. And he was excited too! Just witness the number of times he opened my birthday card to hear the opening bars of Star Wars, and how he identified various tunes when I played them over our sound systems.

The advertisement said that dressing up was encouraged and by that they didn’t mean coats and tails. One family were seen walking along Circular Quay with the dad in Superman lycra and the kids in Harry Potter and Jedi costumes. There were the obligatory Stormtroopers guarding the Opera House and the atmosphere for the matinee show was one of family fun rather than classical seriousness.

For the first time we were seated behind the orchestra. It gave a good view of the orchestra, especially the usually obscured percussion section, though I suspect that it may have upset the sound balance a little.

The popular comic Shaun Micallef, dressed in a white suit, provided the introductions. It wasn’t that long ago that we saw the conductor, Guy Noble, doing the same thing at another concert – I don’t know that Shaun’s presence was a necessary gimmick, much as I enjoy his humour. 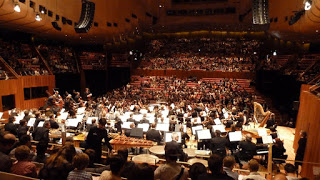 The concert opened with a rousing Olympic Fanfare, which certainly got Alex enthused. The theme from Lost in Space was thankfully short as it is too obscure for many in the audience: I heard a more extended treatment in Melbourne. Jaws was menacing, but by the dissonant start to Close Encounters of the Third Kind Alex was getting a little whingy. I carried him up to the near empty rear and he soon fell asleep on my shoulder. I was very thankful that I could stay for the entire piece, because that dissonance metamorphoses into a triumphant conclusion that sounds so much better live than in a recording.

I returned to my seat and we lay Alex down over our laps. I really enjoyed ET’s Adventures on Earth, despite some curiously lazy, then too fast conducting across the long piece. The Theme from Schindler’s List was much better measured and both beautiful and sad with a lovely solo from the first violinist Kirsten Williams.

At the end of each piece Alex stirred with the applause, but he woke up completely for the Raider’s March, one of his all time favourites. I was somewhat disappointed with the performance of the horns section throughout the concert as they seemed to lack the necessary agility for some of William’s faster passages and twice played very obvious wrong notes. Indeed the brass section often sounded a bit brash. Whether this was an artifact of our location or the Opera House’s poor acoustics I’m not certain, but I found the SSO’s performance inferior to their Melbourne counterparts.

I had played Alex some Jurassic Park the previous night so that he would recognise it, and he did. Whenever I hear those themes I am returned to the amazement of seeing those giant dinosaurs come alive on the screen. The session ended with the ever exciting Superman. Alex turned to us and said “I like it!”, his whole body joining in the rhythm. 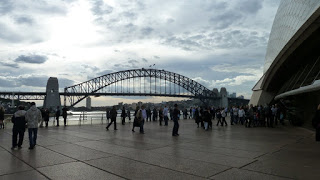 There was then a twenty minute break to take him to the heavily utilised toilets and a run around outside, then we returned for the second session. The March from 1941 is a rousing big band piece, but not what I consider William’s best music. I didn’t realise how complex Hedwig’s Theme, from Harry Potter, is until a talk given during the Melbourne concert. It’s another that sounds better live than recorded.

My favourite performance came with the concert arrangement of Sayuri’s Theme from Memoirs of a Geisha. Just as in Melbourne I was transfixed by the beauty of the music, taken back to 2006 and the scenic Japanese Alps. I’d love to get hold of the concert arrangement, different as it is to anything of the brilliant soundtrack.

By now Alex was getting antsy, unable to sit on the seat for long. He didn’t want the second lollipop that we had given him. Fortunately this also marked the beginning of the Star Wars sequence, mostly loud and exciting music with the Main Title, Imperial March, quieter Princess Leia’s Theme, jazzy Cantina Band and the Throne Room Finale. I’m not sure he enjoyed Star Wars as much as if it had been played nearer the beginning, but he still listened. He did like the encore of Superman again, joining in the long and loud clapping at the end.

So despite the discouragement of my colleagues, Alex made it through the entire concert! Not only am I very proud of him, I’m also delighted that I could share the music with both he and B.