Alex starts childcare tomorrow. I think he’ll do fine, but I’m going to miss looking after him and sharing the day with him. I wonder if it’s cruel that he has to follow our too-long work and transport schedules as well. I guess we’ll see how it goes.

It’s been tough looking after him lately, as he has developed a bit of separation anxiety when I leave his sight or go outside. It’s been a 24 hour job in many ways, especially when he wakes up during the night and it feels like I have little time to myself. Meals are rushed, toilet breaks quickly snatched during his naps. I have numerous computers located around the house so that I can access work emails when he’s on the move – a laptop is just an attraction for his itchy fingers. But when he smiles it is all worth it.

He sees an aeroplane it’s “wow!” and a sweep of his hand with a whooshing noise. His favourite word right now is our dog’s name Kita, which he can say quite clearly. He has started to make animal sounds (ducks quack, lions and tigers roar) and to make sounds from his favourite stories.

Alex is almost walking. He took a couple of steps to me the other day, but he is still too hesitant to let go of his support while he moves around. He can stand unaided for a few seconds though and delighted tonight in doing dramatic “falls” on to his bottom.

When settling him tonight I feigned sleep and he responded by squeezing my nose, then laughing. Very cute! 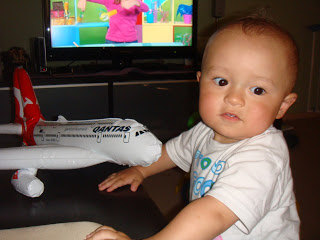