Monty was a pedigree dog. We purchased him from a show dog breeder as a companion to Michael’s other Cavalier, a tricolour female named Meiji. B and I were sitting down at the breeder’s house with the litter of puppies wandering around the floor when Monty kept coming up and nuzzling us. He had his father’s affectionate nature and he chose us.

The contrast between Monty and Meiji was extraordinary. Meiji, the dominant partner bought from a non-registered breeder, was scruffy but highly intelligent and independent. Monty, on the other hand, had a fine coat and beautiful tail, loving nature but was rather dim. He adored both human and canine company and pined for Meiji when they were separated, though he would always cover up any of her business with a quick piddle of his own.

At nine years old Meiji of unknown descent is still the queen of the rear garden. It was the lineaged Monty that passed away first. Apparently, the vet had previously diagnosed a heart murmur, not an uncommon condition in the breed.

We thought that we were doing the right thing by going to a registered breeder, but it seems obvious now. One dog was bred for looks over brains and health, the other, who knows? It was all too uncomfortably close to the recent BBC documentary Pedigree Dogs Exposed. At least neither of them showed signs of syringomyelia.

Maybe there should be two types of registered breeders. One that breeds the canine equivalent of Paris Hilton for dog shows. The other can breed healthy and intelligent dogs for the rest of us. 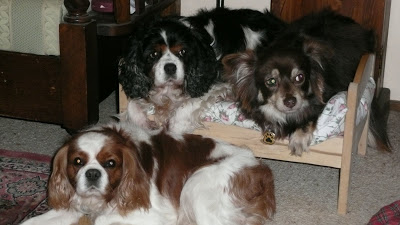