I went to bed last night wondering how easily humans could reach Mars. After a night dreaming of giant storms and packs of wild dogs I awoke to a red glow from the windows and realised that I had arrived on Mars a sometime during the night.

The dust storm had passed over Canberra and inland NSW and struck Sydney. It was not as dramatic as the great Melbourne dust storm of 1983. I remember standing on the playing grounds of my primary school, looking north as a great wall of red approached. The wind suddenly picked up and black ash fell. I didn’t know what it was. A huge fire? It looked like the apocalypse had arrived.

A few hours later, when we left for home, the dust and grit still made it difficult to breathe.

Today there was just a fine powder in the air, visible rather than tactile, and the faint smell of dust. The train windows, cars and ground were coated red. 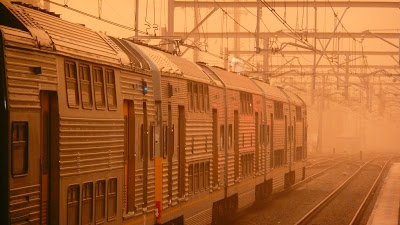 The scattering of light by the dust lent halogens a brilliant blue cast, contrasting the red air. Then Sun was a faded disk in the sky, brightening and dimming as the clouds of dust flew past. 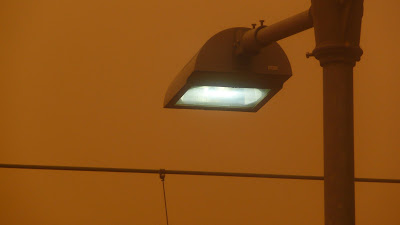 I took photographs all the way to work, which, appropriately enough, is located in Marsfield.

But it could also have been in Beijing…