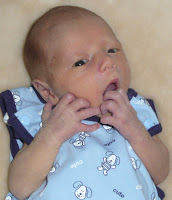 Two weeks after he was born we finally settled on Alex’s middle name.

We had decided long ago that our children would have a Chinese middle name. Mother in law wanted a Mandarin (Putonghua) name, saying that it would replace the other Chinese dialects in future. Right though she may be, B doesn’t speak Mandarin, only Cantonese, and the Mandarin names are not only difficult to correctly pronounce, but also the official Pinyin romanisation looks nothing like the sound.

At the last moment we changed to a Cantonese name. It doesn’t matter if the language is “dying” because this a way of honouring it and anyway, the characters (not official, because you can only register English character names) are the same as in Mandarin.

After all that, what is his middle name? Ming-Lang 明龍.

It means “Bright Dragon”. Actually, Lang is not the most correct romanisation of the character, which is also symbolic of the Chinese Emperor, but it’s how B’s surname was written so we kept it.

Hopefully our Bright Dragon won’t be Ming the Merciless and be kind enough not to be so unsettled at night!